The dangers of opioids and illegal substances often get attention in the media. This is understandable considering the relatively short time it has been considered an epidemic. However, Americans have a longer history of substance use disorder with alcohol and experience it at higher rates. Alcohol is the third leading cause of preventable deaths in the United States.

Binge drinking is avoidable, yet remains the most common, costly, and deadly pattern of excessive alcohol use in the country. More than 18% of adults across the country reported binge drinking.

Arizona ranks 21st in the country for excessive alcohol use, with 17.2% of adults reporting such use, according to 2019 America’s Health Rankings. Of those seeking substance use treatment in the state, 30% were specifically for help with alcohol.

Binge drinking increases homicides, severe traumas, driving under the influence rates, and suicides, as well as leading to excessive alcohol use long-term which causes health issues and even death, according to the Arizona Department of Health Services.

This affects the public in general with community dollars spent for treatment, places a strain on healthcare resources and staff, and has numerous impacts on each family member involved in the cycle—whether they use alcohol or are victims of its destruction. Binge-drinking is a serious but preventable public health problem.

But it isn’t just adults affected. According to the 2018 Arizona Youth Survey, 20% of students statewide in the eighth, tenth, and twelfth grades admitted to consuming alcohol within 30 days prior to completing the survey.

The same number was reported in Maricopa County, the state’s most populous county. The survey is administered biannually through the Arizona Criminal Justice Commission (ACJC) to children in public schools in all 15 counties in the state. Due to the pandemic, testing scheduled for spring 2020 has been postponed and is still being considered for fall. By using surveys such as this, the ACJC wants to position the state’s communities to be more knowledgeable about the frequency of youth substance use and risky behaviors such as gang association.

It can then modify, define, and secure new programs to better address the underlying issues that may be contributing to the frequency.

All parties involved are striving to use evidence-based programs to provide prevention strategies to reduce youth alcohol use.

As far as where teens are getting their alcohol?

A worrisome 9.6% of youth, like the 18% of adults discussed earlier, reported drinking five or more alcoholic drinks in a row during the past 30 days. 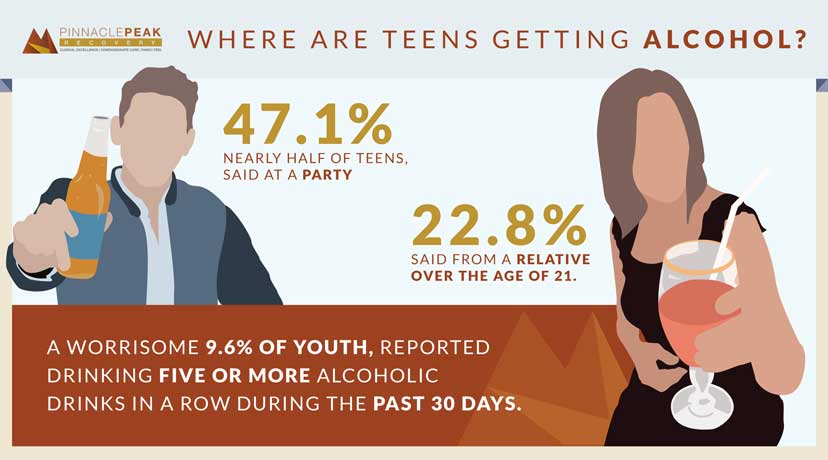 Some things remain unknown, such as why some people develop a disorder but others don’t. People have different relationships with alcohol.

Perhaps some may have grown up seeing it consumed during special events or group gatherings as a way to have fun. Others considered it a rite of passage to adulthood when it became legal to purchase and drink at age 21. Others may have witnessed it as something to do when bored, lonely, or angry, and intuitively learned to reach for a drink themselves. And still others may have grown up in a family without a single drop of alcohol in the house.

Stress, Sadness Cause Students To Turn To Alcohol To Cope

For those under 21, there were five main reasons self-reported in the Arizona Youth Survey addressing why they used substances. In Maricopa County, the top reasons ranged from feeling sad or stressed about parents, family, or school, to getting high and having fun. As far as family affecting a teen’s likelihood to use or abstain from alcohol, consider the following: children are more likely to use it if there is less parental oversight, few clear rules, harsh punishments, and conflicts at home.

They are more likely to abstain if they experience fun family activities, are involved in family decision-making, and are able to rely on parents when needed.

A prevention-based approach is developed with knowledge gained through this survey and many other methods to reach youth regarding alcohol use. By learning the frequency at such a young age, programs are implemented to assist teens in finding other coping methods for stress, trauma, or depression and ways to interact with peers in a healthy environment.

Shomari Jackson is a Project Coordinator with Southwest Behavioral & Health Services, which coordinates the South Mountain W.O.R.K.S. Coalition, a group of community leaders focused on reducing the negative impact and consequences of youth substance use and underage drinking.  The Coalition is federally funded by the Centers for Disease Control and Prevention Drug-Free Communities (DFC) grant. The DFC overall goal is supporting sections of a community to work together and collaborate to prevent youth substance use. “We must find ways to help our people mitigate those feelings of sadness and stress and reduce their need to use,” Jackson said.

Families Need To Communicate Freely To Open up Discussions

Through its “Let’s Talk,”* campaign, South Mountain W.O.R.K.S. provides resources for the family to help bring up challenging conversation topics.* Jackson said the best method for a healthy approach is to “start talking with kids early and often, integrating alcohol, how it’s used, and emphasize drinking is an adult activity for those over 21.”

He added that if your children are already 16, it is still important to start a conversation.

“You're sitting down at dinner and earlier in the week your teen was using some phrasing like "get lit" and "geeked" with a friend. During a casual moment like dinner or driving to school might be a good time to bring up those terms and ask what they mean. “Being in touch with your teen regularly can be a good start to building an ongoing and open communication for the upcoming years of teen parties and events when they're not at home. That can start by asking their opinions on alcohol. “Has anyone offered it to you?’”

The brand of drinks and mixed concoctions might change year to year, but the underlying causes of coping with trauma, anxiety, and depression remain the same.

Behaviors remain the same as well, often shown with new friends, declining grades, and changes in how they dress.

If alcohol use is confirmed, Jackson encourages parents to pause before acting and offers this advice:

“These things don’t develop overnight and don’t get solved overnight. Remain patient and reassuring in asking them to tell you what happened, how they got into the situation, and understand where they came from.

A lot of parents’ reactions are to yell and shout. We know through the research and the data a lot of the root cause is because of the trauma they’ve experienced throughout their lives. When we yell and scream, it re-traumatizes them.

We think it teaches them a lesson, but their brain gets hijacked by stress. Wait until the morning to discuss. Make sure you’re understanding everyone’s safe foremost. Then find out what needs to be done to get down to the root causes.” If alcohol is becoming a problem in a child’s life, parents have many community resources to turn to for counseling services.

Stigma and shame are reasons why people do not seek treatment and should be acknowledged as a barrier as well as preconceived notions that someone struggling with alcohol is a problem only felt in the homeless population, according to Diane Palacios, Clinical Co-Director with the Michael R. Zent Healthcare Center through Jewish Family & Children’s Service. Palacios has been trained as a licensed independent substance use counselor and said lessons learned in therapy can help empower a teen. Through a counselor, a teen can feel listened to, not judged, and learn tools to stay out of risky situations.

These may be taking a different route home, learning how to refuse drinks assertively, and developing short-term goals that will give long-term results in life. She said children are taught to focus efforts on things that drive them and give them passion and purpose, such as music or volunteering at an animal shelter.

Not having a choice is something many children like to stress when parents or a court require them to attend counseling.

“‘Well that might be how you got here, but you do have choices in your life and it is up to you to make them,’ I tell them. If I sense they are minimizing use or not being truthful, I say ‘You’re lying to yourself. This is your life and you’re not trying to please me, this is about you. If you relapsed or didn’t meet the goal you set last week, it’s okay,’ I reassure them. ‘But what are you going to do about it?’ We have to develop a rapport with the child, or we’re going nowhere. When you have that rapport, progress starts.” According to Susan Alameda, substance use initiatives manager with the Arizona Governor’s Office of Youth, Faith and Family, her office focuses on prevention and addressing alcoholism across a lifespan.

“A good amount of our dollars is going to the younger end of the lifespan spectrum. If we can stop kids from starting to drink, we’ve eliminated a huge problem. We want to curb the risk-taking behaviors that are going to keep them from going further,” said Alameda, who has her master’s degree in social work.

Arizona has 12 direct agencies that address the issue of underage drinking. Alameda points to a strong working relationship with the Arizona Department of Liquor Licenses and Control to talk with youth about liquor laws, diversionary services, and prevention messages. The “I’ve Got Something Better”** program helps youth with refusal skills when offered alcohol, similar to South Mountain W.O.R.K.S.

Students can visit the website itmattersarizona.org and learn about community festivals, farmers’ markets, live and virtual events, and resources they can spend time on instead of alcohol and other risky behaviors.

From local neighborhood groups to county and state levels, many initiatives are targeted to address alcohol use prevention among Arizona teenagers. With the 2020 statewide youth survey on hold for now, it will eventually be administered, and it will truly be interesting to measure these programs’ impact in upcoming years.

Pinnacle Peak Recovery in Scottsdale, Arizona, serves adults with alcohol use disorder, as well as substance use disorder and mental health struggles. Oftentimes, a child’s relationship with alcohol is defined by what they see around them and how they see adults coping with life issues. Pinnacle Peak Recovery’s alcohol detox teaches healthier strategies that adults tend to forget as life’s pressures overwhelm them.

Wherever one learns healthy coping skills, through South Mountain W.O.R.K.S. Coalition or Michael R. Zent Healthcare Center, or later in life in an alcohol treatment center like Pinnacle Peak Recovery, these teachings remain a foundation for life’s decisions.